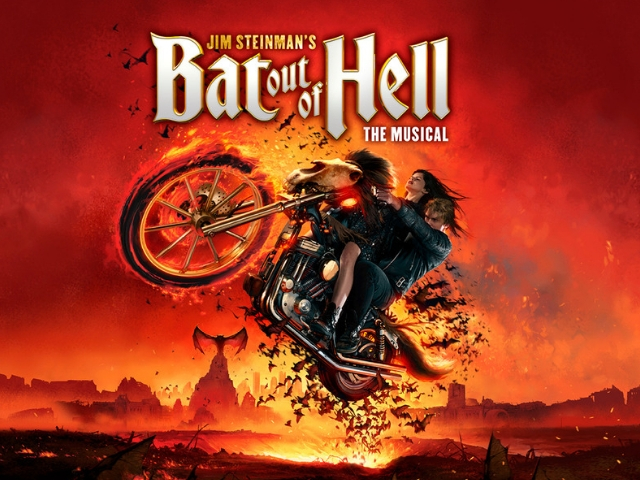 Bat Out of Hell – Theatre Review

Whenever I attend musicals that are based on the work of famous bands or artists, I always enter the theatre with a touch of trepidation. The fear is that the producers of the show have relied too heavily on the strength of the original artist, subjecting the audience to over two hours of songs sang by (no offence) inferior artists. The result of this is the audience leaves shows such as Thriller, The Rat Pack or We Will Rock You with a bitter taste in their mouth, as they’d have been better off listening to the original albums at home.

When this happens, I can’t help but feel it’s down to a fundamental lack of understanding of what the audience actually wants. Yes, they may be huge fans of the artists in question, but you don’t attend the theatre without a desire to witness a story. And if you’re spending the money needed to host a show in the West End, a fair portion of that should always be dedicated to a suitable writer so they can weave an entertaining link batween each hit. So the notion of a Meatloaf musical was as worrying to me as it was compelling.

Thankfully, it soon became clear that the producers of this show – as well as its writer, Jim Steinman – knew exactly what they were doing. They created a modern Romeo & Juliet-style story between rebellious rocker, Strat, and innocent teenager Raven, whose powerful, aggressive and repressive father (Falco) is determined to keep her from the clutches of the troublemaking group, “The Lost.”

It’s a simple tried-and-tested story, but its evolving context helps amplify the strength and meaning of every Meatloaf song, as well as a blend of original music. Rather splendidly, there are moments where this musical enters the realm of Grease where we learn the aspirations and motivations of each “gang.” What’s more, some scores are even delivered in more of a Disney-esque tone as opposed to the Rock’n’Roll versions you might expect. Although some viewers might be unsure of how they feel about that, I feel this is the key to introducing younger audiences to music from before their era. Even as a big Meatoaf fan, I can categorically assure you that it works.

For me, there are three pulsating highs within the show:

1. A heartbeaking duet of Two Out of Three Ain’t Bad between Jagwire and Zahara as he declares his undying love for her
2. The mesmerising performance of Bat out of Hell, which leads to a seemingly fatal motorcycle accident, leaving Strat bleeding heavily at the end of Act One
3. A spine-tingling version of It’s All Coming Back to Me Now, where the parralels of Strat and Raven’s new love is juxtaposed with the decaying love of Raven’s parents, Sloane and Falco.

The symmetry of the latter scene is truly beautiful, and these are moments that will leave even the most sceptical, cold-hearted of viewers on the brink of tears.

A blend of contemporary direction includes the use of handheld cameras, that are used to great effect, and the set design is also something that deserves a mention.

All-in-all, Bat Out of Hell offers everything you could hope to see within a musical. It’s superbly choreographed and acted, and the cast didn’t get a note wrong between them, so if you’re on the fence about grabbing a ticket, don’t be. It ends in January 2019, so book your ticket now in the knowledge that you won’t regret it!