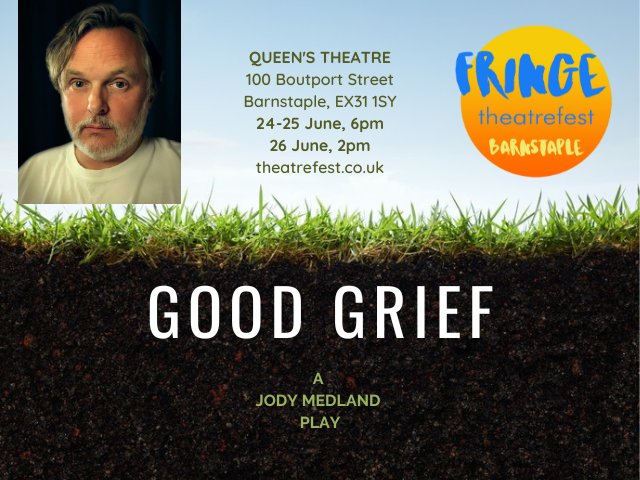 What most appealed to you about Good Grief?

As a young adult I found myself slowly drifting away from my family in favour of my friends and social life. Yet when I got older and became a husband and a parent, I soon discovered that process quickly reversed, drawing me full circle back to being close with my family. For me, Good Grief seems to explore the pivot point of that process, with the death of the wife/mother bringing the Walkers back together, not just for the funeral, but also for a chance to reconnect and maybe to understand and accept each other a little better.

The story gives a poignant nod to the pandemic. Like the characters, do you feel changed by what we’ve all lived through?

Living in the western world for the last 20-30 years, without realising it, I feel that we had adopted a certain sense of entitlement and invincibility. The fiction of the 80’s and 90’s would often predict dystopian futures just around the corner where evil computers would take over the world, mad dictators would start nuclear wars, or a super virus would wipe us all out. Yet by the 00’s we were largely done with all that, because none of it ever happened! Our worst fears never materialised. Instead, communism fell, McDonald’s was everywhere, and we were happy to just watch the Kardashian’s and dream we would all be rich one day.

Then boom, the pandemic hit, and every nightmare and fear seems to have been reignited within the space of just two years. Suddenly, it was illegal to go outside, streets were deserted, huge gaps began appearing on shop shelves, and then it just kept going. Millions died, whole generations have unwittingly become slaves to social media with their faces glued to smart phones. Far right politics have begun rising up around the world, environmental tipping points that were predicted to arrive in 50-years are now said to be arriving in 5. Food and fuel prices are soaring, families are crippled with debt, and now Russia is threatening to start a nuclear war. I think the pandemic has probably changed us all, but for me, it has opened my eyes to the fact that the world is not a cathedral of mankind built on a granite foundation. It is an overcrowded ark, afloat on a dark sea, and maybe there are storm clouds on the horizon.

You play Alvin Walker, the head of the wounded, disjointed foster family. How do you see him?

Alvin seems to me to be a man who considers the needs of others ahead of his own, perhaps a rare quality with us men! He has carried out his wife’s last wishes to the letter, even though we can see in the play that her wishes were pretty unorthodox, and not something he was comfortable doing. I feel he is a man who has taken the responsibility of being a father and a husband very seriously. Raising four children, none of whom were biologically his own, is no easy task, and as any parent will tell you, raising kids can be a thankless task. He seems to have given everything he could to his family – his time, his energy, his love and his money. But even with these efforts, he is not without his flaws. The play begins with his wife, and mother of the Walker family, already deceased. And each character could be forgiven for feeling that they bear some responsibility for her death. Alvin is no different.

In this play, the Walker family display a whole spectrum of emotions. Are there any similarities between the Walkers and your own family?

Whilst the make-up of the Walker family is very different to my own, I think we can all recognise parts our families in Good Grief. Occasional tension between siblings is surely universal, as well as the notion of children being oblivious to the intricacies of their parents’ lives. Surely every family has at least one secret that may, or may not, get revealed. And the Walkers certainly have a chequered past.

What three words would you use to sum up Good Grief?

What other plays would you compare it to?

Whilst the subject matter is very different, Good Grief reminds me of Come Back to the 5 & Dime, Jimmy Dean, Jimmy Dean by Ed Graczyk. In that play, and later in the Robert Altman movie adaptation, the ‘family’ that reunite are a group of friends that come back together for a reunion party of their James Dean fan club. Both plays are set in a single location for a single, unbroken act. Both plays feature a group of characters that have shared their formative years together under the leadership of a lynchpin character. And in both plays, the group are reuniting for a special event. There are many dramatic similarities. In Come Back to the 5 & Dime, Jimmy Dean, Jimmy Dean, the friends are reuniting as adults having been inseparable as children, much like the Walkers who have all left home and grown apart. And in both plays, that process of reunion results in many hidden truths, secrets, lies and issues being slowly revealed. In both plays, despite the tears and the drama that ensues, the characters reach a tenuous level of harmony. The question is, will it last?

Why should people come to see Good Grief?

The pandemic has touched all our lives in a multitude of ways, sparking a spectrum of emotions. With a tight and punchy script, and a cast that know how to bring a level of gritty realism to the stage, Good Grief manages to bottle those emotions, distil them under the glare of the theatre lights, and offer them back to the audience, giving them the chance to voyeuristically peer into the dark secrets and machinations of a dysfunctional family, and laugh at the folly and foibles of the human animal.

We’d like to thank Wayne for taking the time to speak to us and can’t wait for Good Grief to begin its 3-day run at The Queen’s Theatre in Barnstaple. Performances are between 24-26 June 2022, and you can book your ticket from the link below.

Please note that anyone who comes to see the play can get a copy of Spectrum for £4.99 instead of £9.99. Simply keep hold of your theatre ticket and present it to us upon buying the book after its release on 8 September 2022 (International Literacy Day).