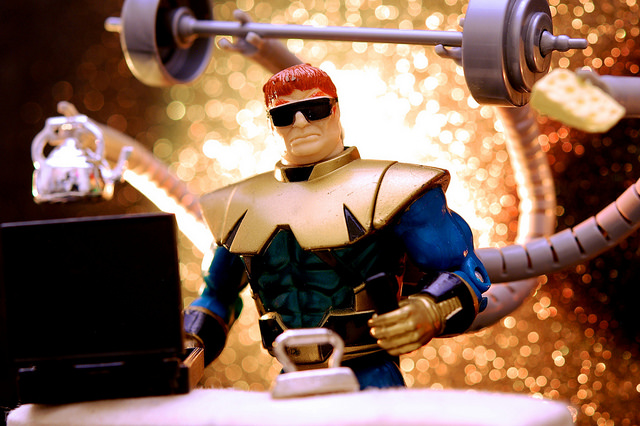 5 steps to writing a great villain

What makes a great antagonist?

A couple of notes before you read this article:

*I’ve referred only to films and not books in this blog because I feel it’s easier to make an example of characters whose arcs take shape over just 90-pages.

*In the off-chance you haven’t yet seen some of these films, there are potential spoilers for The Rock, Rocky IV, Star Wars, Warrior, The Impossible, The Dark Night, 8mm, Unbreakable and X-Men.

To be truly absorbed in a story, we need to believe in the hero and what they stand for. We need to be moved by their own personal mission and we need to be desperate for them to win, and the smaller the odds of victory are, the greater we feel when they finally succeed.

But what makes the role of the villain?

You might not realise it, but they are every bit as integral as the hero. A weak villain leads to an easy victory and subsequently a lack of emotional involvement for the reader, so what should we be mindful of when creating the antagonist in our story?

1. Give the villain a reason to be bad

You might think that as long as the hero’s goal is clear, a villain can serve their purpose by simply becoming an obstacle that gets in their way. However, this simply isn’t enough.

If you’re going to write a story people care about, motivations need to be believable for every single character. It’s true that some character’s aspirations will be significantly smaller than others, but usually the villain is the one character whose goals are absolute. Something in their life has happened to make them certain of what they want and so they often act without much hesitation, because the details of their plan have already been mapped out obsessively.

Take the character General Francis X. Hummel in the film The Rock, for example. From the very first scene in the movie, we learn that he’s loyally served his country for a number of years, during which he’s lost several good soldiers. Because the US government have been deceitful to the victims’ families, the General is now hell-bent on taking drastic action. This is the first scene, and already we know exactly what he wants.

Most interestingly of all, his goal is actually quite admirable, making him a rather complicated villain. This means that there are certain points in the story where we actually empathise with him and understand why he’s chosen the path he’s on.

If you can write like this and still make us want the hero to overcome him in the end, you’ll have your readers hooked until the very last page.

Just to reiterate, if your hero is stronger than the villain, the contest will be dull – no matter how you approach it. Instead, you need to create a scenario where your hero can’t feasibly win.

In Rocky IV, Rocky Balboa can in no way overcome Ivan Drago, yet he is driven to exceed his capabilities due to the death of his friend, Apollo Creed. Not only that, but he has to fight Drago in Russia. This is perfect because readers and viewers love nothing more than the hero having to enter the dragon’s lair, and we’ve seen that Ivan has been bred for this exact moment. He is a fighting machine who isn’t capable of showing mercy. Surely Rocky can’t win?

In Star Wars, Luke Skywalker cannot possibly beat Darth Vader because he doesn’t believe in “the force,” nor does he believe in himself. Darth Vader, by contrast, is the prodigal prince of “the Dark Side.” He is mysterious, frightening, relentless and powerful. How on earth can Luke compete with him?

In Warrior, we have many villains in the fighting contest, but inevitably they’re each disposed of until Brendan Conlon has to fight his brother, Tommy.

Again, the writing is clever because there are sides of both characters we fall in love with, but most of us view Brendan as the hero because he is an all-round good guy. Just to be sure we side with him, the writer makes it clear that if he loses the fight, he’ll also lose his house and his marriage, along with the future of his two beautiful girls, will be in great jeopardy.

Tommy, our villain, is physically an animal who is capable of ripping the door clean off a tank, and he’s grown to hate his older brother Brendan because he believes Brendan abandoned him when they were young.

The result is a thrilling finale with explosive character dynamics, yet Brendan is able to overcome the might of his brother because of his love for his family.

It doesn’t matter how grand or how subtle your story is, make sure your villain is stronger than your hero.

NOTE: Some people may consider Warrior to be a multi-protagonist story, but although that viewpoint could be argued, I feel that Tommy’s unfaltering ambition to beat Brendan, despite the implications, makes him a villain.

3. Be creative with the villain’s “condition”

This is a personal opinion, but I don’t feel it’s ever strong enough to justify a villain’s actions “because he’s a psychopath.” For me, it’s an easy way out and as writers, we should want to find a deeper reason for why our villains have become the way they are.

For example, in the film The Impossible, although based on a true story, the villain is in fact the might of nature and the relentless force of a tsunami threatens to rip a family apart, but hope keeps them going and love sees them survive. It is a truly gripping human story, so don’t be restricted to thinking your villain needs to be a person.

In the instance you do use a psychopath in your story, think of how Christopher Nolan depicted the Joker in The Dark Knight. Although we believe the Joker to be a psychopath, but we are intrigued by the state of his face. We have no choice but to wonder Why on earth does he look like that? The Joker teases us with a series of stories, which he tells his victims just before they die, but they’re all different so we never really know what happened to him.

This is excellent writing because the fact we never learn his story means we’re unable to form a conclusive opinion of him. Therefore, it’s kind of hard to label him as an outright psychopath because for all we know, his skewed view on the world might be fully justified. What’s more, the only time we ever see the Joker turn serious is when somebody accuses him of being crazy. Surely a truly crazy person wouldn’t be offended by that? Quite simply, the writers give us no choice but to be intrigued by the character.

There is only one instance I can think of where the antagonist acted awfully for no real reason, yet it still worked. In the film 8MM, detective Tom Welles is led into the criminal underworld when a widower discovers what looks like a snuff film in her late husband’s safe. By the time he solves the case and discovers the film is genuine, we learn that the abuser paid for the film to be made “because he could.” Whereas I would usually find this a weak link in the story, I feel that a man becoming so rich that he feels he can do anything is what the writer was trying to explore, and so it feels validated.

4. Give the villain common ground with their enemy

Your story will become infinitely more interesting if the hero and the villain have at least one major thing in common, but the more that connects them, the better.

In Unbreakable, Elijah Price’s illness makes his bones incredibly weak. Such is the severity of his condition that he actively seeks out David Dunn, who is unknowingly the real life equivalent of a “superhero.” Elijah’s quest to find David is, in itself, a very noble cause and the result is that a superhero now exists because of his belief. However, in order to find David, Elijah staged three significant disasters, taking hundreds of lives in the process.

I have never seen a superhero story quite like this and the fact M. Night Shyamalan made Elijah so obsessed with comic books allowed him to make classic storytelling part of the actual story. It’s genius and no matter what way you look at it, David and Elijah are on the same journey, just on opposite sides of the coin.

5. Add a layer of respect, albeit begrudgingly

A battle is never quite the same unless both opponents possess strengths that the other admires.

This applies to almost any source of entertainment. In football, if a world class attack comes up against a world class defence, it becomes exciting to see who will come out on top. If a fast boxer fights an opponent who’s comparatively slow but has an earth shattering punch, you cannot help but watch to see who sticks to their game plan the best.

Often, opponents talk as though they hate one another, but it’s usually an act to hide the fear they feel for their enemy’s strengths. Occasionally, rivals will even embrace the fact their opponents are strong because they feel it makes them even better.

My point is that there should always be parts of the hero that the villain admires and vice-versa, even if they would never admit it. This is what’s so fun to write and it can be dealt with in many different ways.

Consider Magneto and Charles Xavier in the X-Men franchise. These men used to be best friends and still probably would be if they didn’t view humans so differently, but Charles believes in people every bit as passionately as Magneto wants to kill them.

The battles that ensue are epic and come as a result of both men refusing to underestimate the other. Such is their mutual respect that we actually feel a little sad about their society not allowing them to be friends, and if ever they are in a room together, there is no danger of one attacking the other. Instead, they’d rather try to convince their old friend to switch sides.

This is probably the best example I can think of between a hero and a villain sharing mutual respect, and it leads us on a journey that couldn’t be achieved if the men simply hated each other.

It doesn’t matter whether you’re writing the part of a hero or a villain, you must make sure the stakes are incredibly high. Whatever they are trying to achieve, failure cannot be an option.

Achieve this, and follow the 5 steps above, then you will have created a truly great antagonist within your story.

*Article image courtesy of JD Hancock under the following license on Flickr.