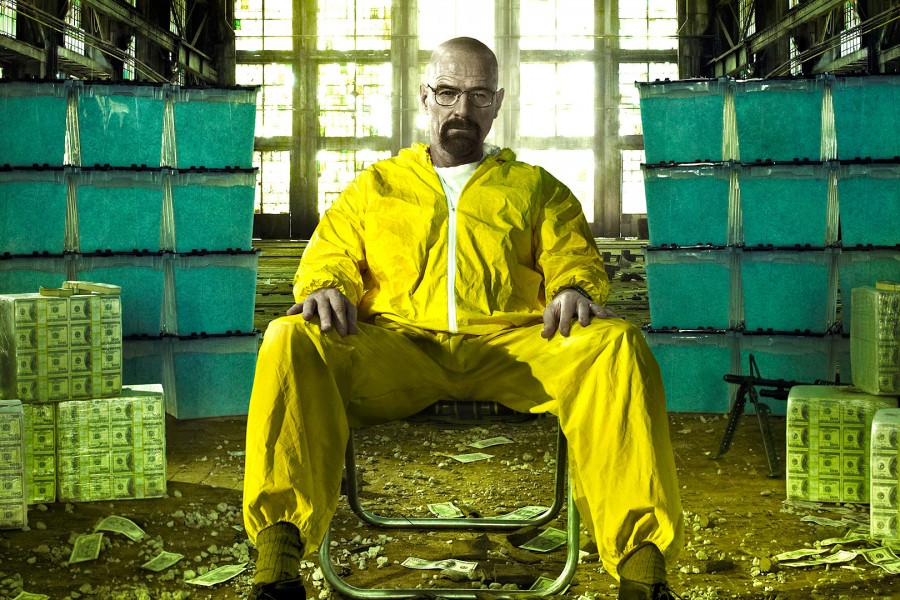 Breaking Bad is one of the most captivating television series’ in recent memory, and when it came to an end I felt the urge to analyse what had made it such a rip-roaring success.

To me, the show is no Six Feet Under, which stirred every human emotion imaginable and delivered the type of poetic ending that won it a place at the summit of television. Nor is it on the same level as The Wire, for which the utter complexity of both the character and script development set the benchmark for those wishing to create ground breaking television in the future.

What Breaking Bad offers instead is pure entertainment. Not the kind of entertainment that falls dead after a brilliant concept is quickly exhausted after its maiden series. Lost and Heroes, anyone? No-no. Absolutely not! The story-lines for Breaking Bad were incredibly well thought out, but the emphasis was always on offering escapism through high concept plots whilst cleverly interweaving unpredictable hooks that have left its fans engaged until the very end.

That being said, the show is not without its weaknesses, and this is what led me to frequently post questions on my social media pages, such as:

What is it that makes Breaking Bad such a major hit?

You can never find an answer without seeing both sides, so I asked of the non-believers:

What is it about Breaking Bad that makes you switch off?

Both questions led to some hot discussion on my Facebook wall. It all made for very interesting reading and even during debate the one thing that was clear was how passionate people were in their opinion.

Upon analysing what made Breaking Bad the show it became, I pieced together what I believe is a steady guideline on how to write a smash hit show. Any of you bright sparks out there might immediately point out that I haven’t actually written a smash hit show yet, and to this I will simply state that nobody likes a wise ass!

Ever since 1998 I have closely studied story and structure, and so I hope you find this analysis helpful.

A lot of people, even writers, get confused between plot and overview. For example, if I was to say Breaking Bad is about a science teacher who is diagnosed with cancer and turns to cooking meth to provide for his family after he’s gone, that is an overview – but it is actually incorrect to say that this is what the series is “about.”

To me, it is about second chances, third chances and fourth chances. It is about bad things happening when somebody is trying to do good. It is about how pure motivations can quickly spiral out of control when misguided. It is about loyalty and split loyalties. It is about addiction. It is about the complexities of life. These are the core themes that hold the series together even when Walt’s cancer scare almost disappears and way after we accept that Walt cooking meth as the norm.

Now tell me how many of the plot themes I have highlighted are things you can relate to. Most of them, right? That is the absolute secret to creating a gripping plot. At first glance, people may believe they have nothing in common with a meth dealing science teacher, but add the elements of family, legacy, fear and loyalty then suddenly we find ourselves fully immersed into his world.

Every single character must serve a purpose. This might sound obvious but it is not to be misunderstood. Some purists will argue that every character should be “three dimensional.” To this, and it is only my opinion, I say absolutely not. Why? Because in real life, not everybody is three dimensional and therefore it would rather upset the balance of reality if everybody’s motivations had complete depth.

When Ted gives Skyler a job and gets caught up in a financial mess, I would say he never really becomes three dimensional, yet his softness as a man allows us to understand why Skyler winds up having an affair with him. Quite simply, he is an attentive yet passive figure who is there to be manipulated when Skyler needs an escape, allowing him to serve the story but in an indirect way.

These types of characters are everywhere in the show and are, in a way, just as necessary as the leading characters because they help make the world real. Each character must have an arc (a journey with a clear beginning and end point) and they must always be believable.

Must a character always be likeable? Again, I don’t believe so. I think what we need is balance. I don’t see how Mad Dog and Gus were in any way “likeable.” They were interesting, but at the root of everything they did lay selfish and evil motivations.

What is interesting, however, is for all of Walt’s sinister actions, we tend to forgive him even though he becomes just like them. This is just as well because, for me, the lead character of a show does have to remain likeable, but why does he consistently get away with it? I believe that if a character’s motivations are pure then we tend to forgive them for any wrongdoing, and that is the main difference.

Walter’s character arc is what the show drew strength from. In the end, we wanted to see if this once frail victim could really rise to the top of the drug trade, and if he did, how he would do it and what it would ultimately cost him. To achieve this, a useful tool was to always ensure the other bad guys were worse than him, meaning no matter how bad Walt became, we always wanted him to succeed.

The first time Saul Goodman stepped onto the screen, I worried that the caricature of a comic lawyer might turn the series into something of a farce. By the end of his third scene, I could see the genius of his inclusion in the show.

In many ways, I think that the long term success of Breaking Bad had a lot to do with Saul Goodman. Not because of the character alone. Don’t get me wrong, some of his dialogue was outstanding and the performance turned in by Bob Odenkirk was first class, but look at the number of new, diverse story-lines it offered the show. Look at the rivalries, unlikely friendships and dynamics it built into the plot and characters throughout what suddenly became a much bigger world.

Suddenly, Breaking Bad could be funny, edgy, quirky, dark, dramatic or full of suspense and the story still made complete sense. By the end, news that Saul would later earn his own spin-off series, Better Call Saul, came as little surprise.

4. Nail down your timeline, structure and establishing shot

If I gave you the brief that we were making a new show and that a middle-aged man gets cancer, etc, how would you have written the pilot episode? Be honest with yourself. Imagine the first few scenes that you might have created and judge them accordingly.

It would have been very, very easy to make it dull, dreary, depressing, long-winded and over dramatic. Would your first shots have been of a battered RV careering into a ditch like a bat-out-of-hell, driven by Walter White in his underpants?

The establishing shot of a film or series is absolutely key. Always!

Within just moments of Breaking Bad starting, we knew a number of things:

* It was a high-concept show
* The story would often be told out of sequence
* It was going to be exciting and surreal
* There were going to be extreme story-lines.

The next time you write a script, tell me if your first page contains all of these elements and if not, ask yourself again why you aren’t attracting the interest of producers, studios and investors.

On that point, the amount of new writers who think the audience “not knowing where the story is going” is a good thing is insanely high, so let’s clear this up right now. Withholding the plot from your audience is not smart or clever. Audiences never appreciate being baffled and the real skill is making it abundantly clear what the story is, yet still managing to compel and surprise them. From the tag line alone we should know what is going to happen.

Again, I take you back to the tag line of Breaking Bad:

A terminally ill chemistry teacher teams with a former student to manufacture crystal meth to secure his family’s future.

So, we already know what happens. What we don’t know, and where we want to be surprised, is how, and a science teacher being in the Nevada desert in his underpants gives us plenty of enjoyment in watching the story unfold.

There’s an age-old saying in film that goes along the lines of:

“If you give your audience a special ending, they will forgive you for any earlier sins.”

There is an awful lot of truth involved in this.

With television, pay-offs have to be more frequent because it cannot be assumed your audience will stick around for the climax, which in this case comes after 5 seasons, just to see the ending. Instead, they have to be more spread out.

All writers know that shows must include hooks, sub-hooks and cliffhangers but the genius of this lies in how they are balanced. Too many mini-hooks and we’ll get bored. Too many cliffhangers and somehow, we still get bored. However, when you tune in to a show that you know will always reach a satisfactory end point, but occasionally have a spellbinding conclusion that will make it impossible to sleep without seeing “one more episode,” the combination is dynamite.

Who on earth could forget Walt following a dealer out of the supermarket to growl at his boss “Get off of my turf!”? Or when he stood over Jesse’s troublesome lover as she choked to death on her own vomit, choosing not to help? Or when we discovered that Walt did poison that kid after all? Jesus! If these aren’t the things that will keep you watching a show, nothing will!

So there we go.

In summary, these are what I believe are the 5 key points to building a mainstream concept. If they are followed and mastered then, who knows – I could be writing about the genius behind your series in the near future!