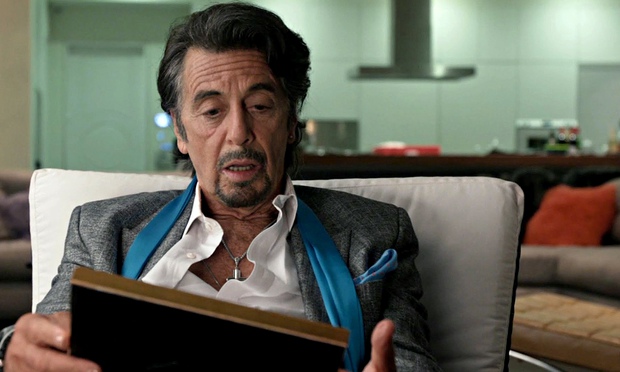 I watched Danny Collins with quiet optimism because rarely do I regret watching an Al Pacino film, and Annette Benning is an actress I’ve always keenly admired. I was also a big fan of Crazy, Stupid Love, so with Dan Fogelman at the helm as writer / director, my interest was definitely spiked. At the back of my mind, though, I knew this had the potential to be a very middle-of-the-road movie, so I manhandled my expectations to keep them as low as possible.

Straight off the blocks, the sight of Pacino prancing around on stage made me cringe. It was hard to tell if Pacino had started taking any old role like his old friend, Bobby DeNiro, or if this was an astute portrayal of the Rod Stewarts of the world, who continue to rock their pensioner’s socks on stage for far too long.

As we edged further into the film, I found the portrayal of an old rocker on tour – particularlry one who’d grown to despise his music – rather touching. Suddenly, the film started to pose subtle but hard-hitting questions: what do you do if you know your hot young partner is cheating? What if the material riches you’ve gained over the years no longer fulfills you? What if you realise you sold out and the time to rectify bad decisions is quickly running out?

All great writing makes us care for our hero and continues to beat the shit out of them while they’re down. So what better way to push Danny Collins over the edge than to let him discover that the great John Lennon had written to him forty years earlier and included his home phone number, only for the letter to have been withheld until now?

As an artist myself – and one who spends mass amounts of time seeking inspiration, motivation and guidance – I couldn’t help but be sucked into Danny’s depression and wonder how I would cope with similar news. To imagine how different your life could be had you receieved certain information, or had you made different choices, is a universal human trait, so by the time the film’s theme was stated, I was in.

Immediately, our Danny makes wholesale changes to his life. Importantly, as he does this, he doesn’t blame anybody for his shortcomings but himself. These are valuable lessons to any aspiring writers out there:

The way Danny Collins has been set up within the first 10-15 pages means there’s no way we won’t like him, or sypathise with his situation.

I was happy that the film got off to a good start, but how often do we see promising set-ups become ruined by aimless middles and dissapointing endings? For this reason, the jury was still out.

When Danny moves into a hotel room in a quiet part of New Jersey, we’re quickly introduced to his love interest. The dialogue between the characters is fun and witty, as it is throughout the entire cast. What every film needs though is a solid B-story to keep us engaged, and in Danny’s case, it comes through an attempt to meet his illigitimate son. How does the writer raise the stakes further? We learn that Danny and his son, Tom, have never met before and, according to Tom’s wife, they will probably never meet again.

New writers should note the scene when Danny first meets his daughter-in-law and granddaughter because it does two things quite beautifully:

Make no mistake. Danny Collins is exceptionally well written, and it was whilst watching this scene I felt certain the skill and the craft displayed would carry through until the end.

The first meeting between Danny and his son was built up so well that if the chemistry between the actors was right,  I felt it had the potential to be pretty explosive emotionally. I had mixed views on Bobby Cannavale, who plays Tom, but from the moment he appeared on the screen I could feel the sensitivity of the direction and the skill of the actors combining to noteworthy effect. Frankly, all the elements were now in place for a wonderful movie and I had yet to witness a weak point.

Now, an amateur writer might have had Tom barging into the house, shouting and screaming at his old man. There is no need to do this because by the time he arrives home, we’ve already learned of his anger. Instead, he picks up his daughter and whispers in her ear to calm her down. This makes him infinitely more interesting because in that moment, we become aware of how devoted he is to his own family. He can be kind even when he is vulnerable. This tells us that despite the obvious tension between Tom and his father, the apple hasn’t fallen far from the tree. They are alike – he just doesn’t know it yet.

The writer even worked in symbolic undertones, which is something I love, and when Tom eventually tells Danny to say goodbye to Hope – his granddaughter – you really feel he means it on two levels.

However, having identified where he can help his newfound family, Danny throws money at a number of problems. He pays for his granddaughter to have a great education at an advanced learning centre where her condition will be embraced. He takes them shopping for the entire day, allowing his son to spoil his daughter in a way he always wanted, but never could.

Then, something magical happens.

In an emotional scene between Danny and Tom, Tom admits that as far as he’s concerned “the slate is wiped clean.” Again, this goes against what most writers would do as the temptation would be to make Danny have to really fight for his son’s forgiveness. Yet here we are, only half way through the film, and he already has it.

Enter a very solid “mid-point shift.” The reason his son says they can’t have a relationship is because he’s awaiting some test results, with the doctors believing he has the same illness that killed his mother. This transcends the story onto a different level. The stakes are higher, and the resolution is no longer something that can be solved with money.

For writers who study Blake Snyder’s beat sheet, you’ll know that Danny Collins is a completely formulaic screenplay. It follows every single rule, yet acts as proof you can be endlessly creative within the structure of the principles.

Within the embodiment of this ageing rockstar, we see good intentions, a determination to succeed and a willingness to make bold decisions. This is what leads Danny to gain the trust of his new family, win the affections of his love interest, write meaningful songs he can be proud of and create an opportunity to get everything he’s ever wanted by playing an intimate gig for his fans.

As any good writer will know, that can’t happen. Not yet.

Instead, Danny has a relapse. Not only does Danny lose his nerve and skip the heartfelt music he’s worked so hard to create in favour of the old, cheesy classics that his fans demand, but he gets caught taking drugs by his granddaughter, drops and smashes the frame that holds his prized letter from John Lennon, enrages his son, loses the limited faith his manager has in his new music and disappoints the love interest into rescinding her acceptance of his dinner invitation.

The whole time we’ve seen Danny Collins, he’s worked so hard and barely put a foot wrong, so we can’t help but feel for him when everything he wants from life is threatened. What’s more, it turns out his finances are quickly fading, so if he wants to keep the promise of looking after his new family, he has to go back on tour with his old songs.

With so much bad news coming in such a short space of time, who wouldn’t experience a rather dark night of the soul?

If you haven’t seen this film then my notes my lead you to suspect it’s something of a dramatic piece, yet it never loses its sense of humour, and making such big internal conflicts seem humourous is a really difficult skill to pull off.

What I most loved about the film is the way it puts an original spin on old cliches, and in the final scene, this is summed up beautifully. How many times have we seen doctors delivering news to patients? It’s very tough to make a scene like this feel new, but when Danny – who has been taking obsessive notes of late – informs his son that the doctor uses his first name whenever he has good news, and his surname whenever the news is bad, we find ourselves on the edge of our seats, waiting, hoping, praying that the doctor says “Tom.”

Danny Collins is by no means a bona-fide classic, but it’s masterfully written, sensitively directed and beautifully acted, so it gets a very solid recommendation from me – both as a film and as a useful case study for writers. 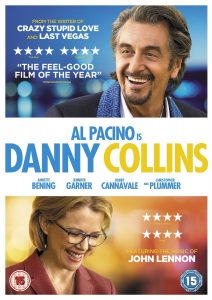 Danny Collins is available to buy on Amazon today, and comes highly recommended!

Finally, Jody teaches many writing courses as either part of a group or on a one-to-one basis. To find out more, visit our creative writing seminars page.