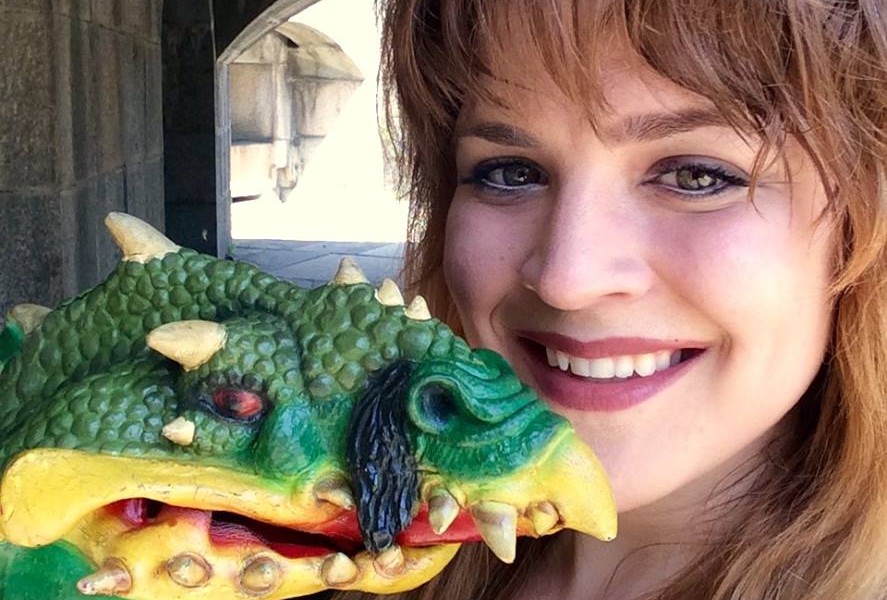 PWM: Where did the inspiration for Dragon Speaker come from?

ELANA: I started writing Dragon Speaker on the day I turned 14. I was a socially awkward kid, just a little too weird to fit in, and I had an existential crisis on my birthday – or at least, as existential a crisis as a teenage girl can have. “Who am I?” I wondered. “Where is my life headed? What sort of person am I going to be?”

I didn’t have any of those answers at the time – and it can be argued that I still don’t – so I started writing in the hopes that some fundamental truth about myself might be revealed. I’d always loved writing and my head was teeming with ideas, but prior to that point I hadn’t focused on just one concept. This mini identity crisis was the push I needed.

Ultimately I wrote the kind of book I wanted to read, complete with a noble quest, an amazing journey, and a world filled with magic. Of course, the story has evolved and grown as I’ve grown, and in that regard it has actually allowed me to find some of the answers I was seeking. So I hope that it becomes a book that people can read to find inspiration and answers of their own.

You seem to have a deep affinity for dragons. When did the fascination begin?

I’ve loved dragons for as long as I can remember. When I was very young – we’re talking toddler-age and kindergarten – I was obsessed with dinosaurs. I knew all their names and had tons of dinosaur books. I didn’t play with dolls, I played with T-rex figurines. As I got older and my interests branched out to include fantasy fiction, dragons were a natural and obvious progression from dinosaurs.

In every book I read, dragons were depicted as these amazing, powerful creatures, whether they were good or evil, main characters or side-notes. I loved that everyone in the fantasy field just sort of agreed that dragons were awesome. I actually wrote my first “book” when I was five years old, and it was about a dragon and a girl on a quest. So it’s safe to say that I come by this obsession honestly!

In your story, Keriya – our hero – has to overcome some truly daunting challenges. As her creator, is her journey connected to any adversity you’ve had to face?

Absolutely. Keriya has changed a lot from the first draft, and her development is largely based on the challenges I’ve faced. I can almost map my personal growth based on previous drafts of the manuscript.

Since the books span a time frame of 4-5 years, the problems Keriya has to deal with become darker and more adult as she grows up. Some of the most visceral passages in later books are directly lifted from my personal experiences, failures, or losses. She faces hatred, fear, and discrimination, and she often struggles with her own morality as a result. One of the underlying themes in the series is self-acceptance, and Keriya’s journey centres around overcoming these obstacles in a cruel and unjust world – a journey which I think everyone will be able to relate to.

Dragon Speaker is the first part of The Shadow War Saga. Do you already know how many books there will be, or are you going to keep us guessing?

Yes! There are five planned books. Book II is mostly finished and Book III is complete, but Books IV and V need some plastic surgery before they’re ready for print. I’ve written the ending though, so I know exactly where it’s going.

I was dabbling with a sixth book for a while, but I don’t think it will be necessary. Everything is designed to wrap up by Book V. That being said, I do have ideas for prequels which I’m pretty excited about!

Your characters complement each other really well within the book. How do you develop your characters during the conceptual stages?

Oh man. I’m going to sound like a bad person, but I actually don’t do much in the way of conceptualization. Every character I write is simply a different facet of myself – for example, Fletcher is the good and idealistic part of me; Roxanne is the confident, outspoken, totally-not-awkward person I pretend to be on my best days; Cezon is who I would be if I was slightly more comfortable with breaking the law.

A good chapter will often write itself for me because I know how all these people (read: myself) would react in any given situation. Some characters have elements of my friends in them, and it helps to draw inspiration from real people I know. But when you’ve been writing about the same characters for over a decade, they also take on a life of their own. Fletcher faces some adversities that I’ve never personally experienced – but it’s easy for me to empathize with him and figure out how he’ll handle an obstacle because I view him as his own person and I’m so familiar with him.

Your main characters embark on quite a quest to find the last remaining dragon, entering many different lands along the way. How did you manage to express such different settings so authentically?

I love nature and I love to explore, so imagining and describing exotic places is never hard for me. There are so many amazing things that go overlooked in our world that I wanted to highlight some of those elements in Keriya’s world. The waterfall-mesa of the Galantrian Village is inspired in part by Niagara Falls. Shivnath’s Mountains and the Aerian countryside were inspired by Mount Katahdin and the beautiful untouched wilderness in northern Maine. Noryk is a mishmash of the best aspects of famous cities and landmarks around the world. I drew upon places that I loved, places that were already fantastic in their own right, and just added a little bit of magic to them.

When we first read Dragon Speaker, we couldn’t help but compare it to His Dark Materials. Are you a fan of Phillip Pullman, and what other writers dominate your bookshelves?

I am absolutely a fan, and His Dark Materials was one of my favourite series in my later teen years. I didn’t watch too much television or movies growing up, so books were all I had. The Hobbit and the Lord of the Rings trilogy did a lot to define me as a fantasy reader and writer. The Wheel of Time series was another major influence – Robert Jordan built such a complex and intricate world, and that really set the bar for me. It also made me realize how powerful it could be to experience a story from different characters’ perspectives.

I admit I’m also a big fan of YA material. I recently was referred to the Wings of Fire series, which is aimed at younger readers, but I loved it. Of course, those books are 100% about dragons, so there’s no way I couldn’t have enjoyed them; but they were a refreshing departure from some of the weighty adult series I’ve been reading of late.

You have quite an extensive history in film. Do you find it tough juggling the different skills and disciplines needed for creating films and books?

Part of me actually regrets getting so deeply entrenched in film, because it caused me to neglect my books for a long time. There weren’t enough hours in a day nor days in a year for me to produce all my film work and finish an entire novel series.

My biggest motivating factor has always been the story – telling a great story, and finding the best way to convey that story to your audience. Most filmmakers point to a particular film and say “That’s the movie that made me want to make movies”. For me, it was the first Lord of the Rings film. It turned magic into reality. It was so visual and immersive. It brought me to a different world. I knew the moment I saw it that I wanted to make movies like that, and I worked hard to learn everything I could about the film industry.

Unfortunately, I don’t have hundreds of millions of dollars, so I have thus-far been unable to make Lord of the Rings-esque movies. As time went on, I gravitated back to the medium of the written word, realizing that it actually afforded me a lot more power and freedom to create – and share – the magical worlds I saw in my head.

What’s the most exciting thing about knowing Dragon Speaker will be out in print this summer?

The fact that it’s actually happening at all is exciting. It’s such a huge accomplishment that I managed to get this far. I went through years of submissions and rejections from agents and publishers alike, so I had really lost hope that it would ever go anywhere.

As cliché as it sounds, it is a dream come true – and I’ve done a lot of big dreaming, so I got used to dreams not coming true. The whole process of getting picked up by Pen Works Media has re-energized and re-inspired me.

Where would you like to be in five years’ time?

Ideally publishing the fifth book in the series! I’d love to see the books become successful, and as long as we’re dreaming big, I would really love to see them get adapted into films. I think it would be amazing to see Shivnath and Thorion up on the silver screen. I’d also like to have started work on the prequels I have planned. There are a lot of Allentrian stories I still want to tell!

We would like to thank Elana for her time, and wish her every success with the release of Dragon Speaker – not that we’re biased or anything!